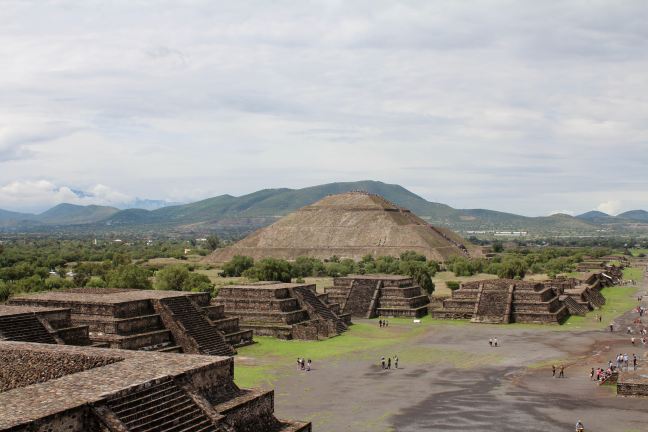 One of the best things I did while staying in Mexico City was to take a guided tour to the amazing archaeological place of Teotihuacan.

I woke up rested and ready to go on this tour. I had chosen the early morning one (I highly recommend this one) to avoid the crowds and witness the place in its morning glory. Unfortunately, the nature seem to be fighting agains me on this. It was rainy on the drive there, I was already dreading a whole morning in the rain, without being able to take any proper photos, and probably getting sick on top of it.

Arriving there, we were immediately approached by local vendors selling umbrellas and rain parkas. I resisted. I wouldn’t buy any. The rain was light and it would pass. It had to.

I started to feel I wasn’t really going to enjoy the experience when I realised how steep the steps to climb the pyramids actually were and how slippery the rain had made the clim. Slippery and dangerous. Especially if you’re an uncoordinated human being like me, a full disaster when it comes to physical aptitude. Plus, I’m terribly afraid of heights, which makes things even worse.

But I was right. The rain was gone soon enough, and all there was left were puddles on the ground and a misty smog in the air. The perfect atmosphere for such a mysterious place.

And I was quickly completely engulfed in everything our tour guide was telling us.

Nobody knows who inhabited Teotihuacan. It wasn’t the Aztecs or the Mayans, but the place was indeed discovered by the Aztecs. When they discovered it, it was empty, deserted. There wasn’t a single soul left. Only these massive and impressive temples and pyramids, constructions which surpassed by far the ones built by the Aztecs.

The human being is proud. It has been since the very beginning of times. The Aztecs were at the time considered the greatest civilisation in mesoamerica. When faced with such magnificient buildings, they couldn’t accept others before them had been better.

So they created a myth, which is what us humans have been doing since the very beginning of our own history to justify what we cannot or don’t want to explain. They said such accomplishments could only have been achieved by Gods, no mere men. They had built Teotihuacan, and this became a sacred place, of pilgrimage, to the Aztecs.

Isn’t it fascinating? Today the pyramids of the sun and of the moon attract millions of tourists. And when you get there, you do understand why the Aztecs consider it to have been built by Gpds. Nobody knows how these mysterious people did it – the pyramid of the Sun follows the same outline of the mountains behind it perfectly, as well as the pyramid of the moon. How they achieved such accuracy is something that still bothers me in nights of insomnia.

It felt good to think that I was in a way following the same steps of others about 2000 years ago. After all this time, we are really not that different – we still continue our search for meaning. In some way, even the most skeptical of us, wants to have faith in something that is beyond us, our world, our abilities. Our comprehension, really. And that was all I could think of after a strenuous climb to the top of the pyramid of the sun, to admire the beautiful views extending below me.

I do like to believe there was almost something magical about these ancient civilisations. Something unique that we lost at some point in our history.

One thought on “Teotihuacan, the ancient mystery”